← CATHERINE RYAN HYDE: ASK HIM WHY IS A STORY ABOUT WHAT HAPPENS WHEN WE DON’T LISTEN TO EACH OTHER ENOUGH
NIKKI WILD: AT THE HEART OF IT, ARROGANT BRIT IS A LOVE STORY →

BRAD TAYLOR: PIKE LOGAN IS AN AMALGAMATION OF PEOPLE I SERVED WITH IN SPECIAL FORCES

Brad Taylor is a real deal. A former military commander with huge experience in Special Forces, he became a very successful writer. Our next guest is born in Japan, grew up in Texas and spent most of his life around the most dangerous places on the planet like Iraq and Afghanistan.

If you want to touch the reality of warfare Pike Logan is your man. The famous protagonist of the same name series is ready for his next adventures in the Chapter IX The Forgotten Soldier. The novel was released on December 29 and made a quick entry into NY Times and USA Today bestselling list.

It’s a great pleasure to welcome Brad Taylor at Land of Books.

– Brad, Pike Logan continues his adventures in Book #9 of the series The Forgotten Soldier. What the readers may expect from the new novel?
– The Taskforce was created out of whole cloth, completely made up by me for my novels, but I used my experiences to do so, tapping into what I knew of the world in which I’d lived. The organization is nothing more than a fantasy we used to wish existed whenever we ran into the inertia of the United States bureaucracy, but inside, we realized why such inertia exists, and it’s precisely to prevent any one individual from misusing a dangerous asset. America has had a love/hate relationship with special operations throughout its history, resulting in many units being disbanded or rendered toothless the minute the threat was gone because the cure was believed to be worse than the disease. It is only in modern times that SOF has flourished, but it has come with a price. The crux of repeated covert action in a democracy is that a nation can only go so far before its actions begin to erode the very ideals the unit was designed to protect, which is why we have such robust oversight in United States Code. The Taskforce has no such constraints, and I’ve threaded the potential for its abuse throughout my books. This time, I decided to explore it as a main theme. 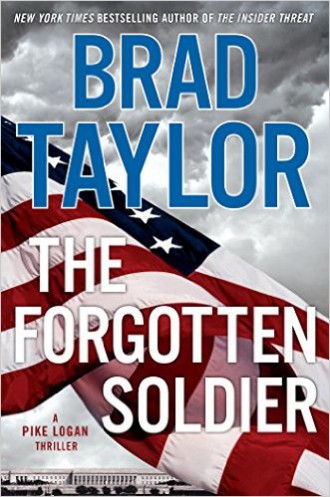 – How did you decide to write the story of Pike Logan?
– I’ve always been a voracious reader, and I’ve always wanted to write a book, but I never really had the time. On my last assignment in the military, I got the chance. I wanted to write a story of redemption, but as they say, you write what you know, so Pike Logan is a Special Forces Operator. If I had been in law enforcement, he’d have been a cop, but I was in the military.
– What is the biggest challenge in every new novel of such series?
– The plot has to be fresh – it can’t be a rehash of any previous book with a different setting – yet it has to be familiar enough to returning readers. Go too far afield, and the reader is turned off. Don’t take enough risk, and it seems like a lazy repeat. In addition to that, the characters have to grow and develop. In the real world, people change, and they have to in fiction as well.
– Tell us something more about your main character Pike? Is he close to someone from your real life?
– He is an amalgamation of people I served with in Special Forces. We have some of the most dedicated and skilled Operators on earth, and he represents them.
– How much time did you need to finish the story and to publish it?
– I’m doing two books a year now, so while I’d like more time, I get six months from start to finish. So, I suppose I’d LIKE eight or nine months, but I get six.
– Who are you?
– Retired military, husband, father, and world class excuse maker for household chores.
– What are your writing habits?
– I can write anywhere, so I don’t really have any firm habits. Generally, I let the story percolate in my head, then when I’m ready, I type wherever I am. I’ve found that if I attempt to force the story – to force out a certain number of words a day – I end up not liking what I wrote. I now just trust my instincts, and when I’m ready to write, I do so.
– Are you satisfied by the sales of your books?
– You always want to reach more readers, but yes, generally, I am. The Forgotten Soldier made the top ten of both the New York Times and USA Today book lists, so it’s doing well.
– What are you doing to promote your book by the best possible way?
– My publisher handles the advertising side of the house, where as I do all of the direct interaction, such as this interview, for instance. Currently, I’m in a hotel room as I type this, traveling on The Forgotten Soldier book tour. In addition to that, we run promotions and contests on Facebook and Twitter.
– When we will see your next novel and would you unveil something more about it?
– The next Pike Logan adventure, called Ghosts of War, comes out June 28th, and is set in Eastern Europe. I moved away from Islamic terrorism and towards the fault lines of the old Cold War. I’m about half way through, and it’s due in a month and a half. As usual, I’m far behind.
– In Days of Rage the action is taking place in the Bulgarian city of Plovdiv. Share your experience from visiting Bulgaria?
– I always travel to the locations in the books to get a feel for the terrain I’m preparing to write about, and it’s critical to getting the rhythms of the country in question. For Days of Rage – set in Turkey and Bulgaria – I took a bus from Istanbul to Plovdiv and spent a few days of research in the city. I loved every minute of it, and crammed in as many locations from that area as I could, from the casinos at the city center to the beer gardens, ancient stadiums and other historical sites – such as Asen’s fortress outside the city. I must have walked a hundred kilometers around that town, but wished I could have stayed longer. There’s nothing like exploring a unique city – and Plovdiv is certainly unique.
– You’ve been in the army for 21 years, including 8 years as a commander. When you got the idea to become a writer and to describe your operations’ experience?
– Actually, pretty much all of my time in the military was as a commander, but most of my experiences are classified, so I can’t really discuss them. Having said that, they aren’t that different from most Special Operations Forces in any unit of any army. As I said above, writing has always been a goal of mine, I just didn’t have the time to do it. My last assignment was as an instructor at a senior military college, and I finally had the time to write. My goal was to simply write a single book. I had no idea it would lead to completing nine books in five years.
– What was your most dangerous mission during your army career?
– I can’t really discuss any missions, but suffice to say, my most dangerous missions were probably in training. We sometimes did things that made me question my own judgment.
– Your opinion of book to movie adaptation of American sniper? How close to reality were the scenes from the film?
– I haven’t read the book, but for the movie I didn’t find it that accurate. Some of the military scenes were a little ridiculous with the way they were portrayed. Don’t get me wrong, I enjoyed the movie, but I wouldn’t say it was an accurate representation of what went on in Ramadi and Fallujah.

← CATHERINE RYAN HYDE: ASK HIM WHY IS A STORY ABOUT WHAT HAPPENS WHEN WE DON’T LISTEN TO EACH OTHER ENOUGH
NIKKI WILD: AT THE HEART OF IT, ARROGANT BRIT IS A LOVE STORY →