← ERIK AMMON: I AM A MILLION DIFFERENT THINGS
ANDREW MILNER: WRITING SONGS IS AS MUCH CREATIVE PROCESS AS WRITING A BOOK →

– Stephen, what is your fantasy series Orbbelgguren about?
– The Orbbelgguren series has many plot lines that twist and turn and it’s hard to really pin-point anything without giving away the surprise ending. However, among these various plot lines, we see a set of dark elves that learn more about themselves and each other. They grow, mature and develop relationships. They establish depth of character in a world that hates and fears them. As everything they know changes, as war erupts around them, as the world starts to die, they find that they must adapt and change as well.
Each book seems to introduce a little bit of the real plot line and over time the reader will begin to understand what the series is really about. However, expect the unexpected. I think the reader will be pleasantly surprised. 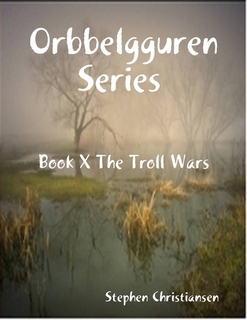 – My first offshoot book, “Emilia”, is about 75% done and I hope to finish it by the end of the year. My goal is to finish the editing by the end of Jan 2015 and release it then. Then it’s off to the next book, book 11 of the series, “Grandfolk”.
“Grandfolk” will take place right after book 10 “The Troll Wars.” Here, we are going to see what happens to the world after a great war has left it to die. There will be survivors’ remorse, anguish over lost loved ones, guilt about decisions that had to be made, ghosts haunting those that made these decisions, but worse yet there is a vacuum of power that will be filled.
The individual that comes to power has been driven mad by watching his god die and has been made insane by traveling through time too often. He will stop at nothing to ensure that his species survives, even if it means destroying everything else. He will be able to bring back the dead and turn them against their loved ones. The war is over, the nightmare has just begun. Death is only the beginning.
– Do you have other writing works except Orbbelgguren series?
– At this point, I don’t have any other writing works. This is my first published works, although I have several unpublished that I would need some major work before being made public.
I’ve kicked around a few ideas. I would like to do a conspiracy novel, similar to “Foucault’s Pendulum” by Umberto Eco, a two-book detective series, and a story about a small desert town done in a Stephen King style. I’m also thinking about bringing some of my short stories together and giving them a common theme, so the whole book is one story about several stories all tied together. I would also like to start to compile some of my best poetry.
– What (where) are you working and how (does) your job experience helps you in your creativity?
– I currently work at a durable medical equipment provider as a medical biller. My wife and I work at the same place and we have work together for the majority of our marriage.
While working at my currently location, I’m able to see the physical and emotional needs of individuals. This has helped inspire me to add compassion to my characters, the ability to empathize and sympathize with their world around them. Since these dark elves come from a society where compassion doesn’t exist, this bit of depth of character is critical to their development.
– If you may ask yourself one question in the interview what it will be? (Don’t forget to answer)
– I think the one question I would ask is: What are your influences in your writing?
There are many things that have influenced my writing and I hope that I give them their due justice.
My experiences in life play a major role. I hope to bring some of the places I’ve been to and some of the trials of my life into the series. I find that this series is a catharsis and a reflection of my life.
Then there are specific authors that have made a great impact. These include R.A. Salvatore, Stephen King, and my favorite Edgar Allen Poe. You can see a huge impact from R.A. Salvatore in most of my books but there is definitely an influence from King shown in book 7, “Qu’ellar B’Nossta” and more so in the one I’m writing now, “Emilia?”.
Finally there’s certain shows that I used to watch that have contributed. These include “The Outer Limits”, “The Twilight Zone”, “Alfred Hitchcock Presents”, “Ray Bradbury”, and “Tales from the Dark Side.” These have given me off-the-wall plot lines, twists, turns and different perspectives. I think the reader will be able to see some of these influences in the series and will be pleasantly surprised.

← ERIK AMMON: I AM A MILLION DIFFERENT THINGS
ANDREW MILNER: WRITING SONGS IS AS MUCH CREATIVE PROCESS AS WRITING A BOOK →