← SIMON WOOD: AN ISSUE OR SITUATION INSPIRES ME TO WRITE A BOOK
HANNAH FIELDING: VENICE CAPTURED MY IMAGINATION →

D.M. PULLEY: I AM STILL IN SHOCK FROM AMAZON BREAKTHROUGH NOVEL AWARD

D.M. Pulley’s debut novel The Dead Key is currently on the second place at Kindle Amazon Bestselling list. The novel will be officially released on March 1. The story won the Grand Prize of Amazon Breakthrough Novel Award for 2014.
We’ve got a chance to speak with D.M. about her book and many other things. 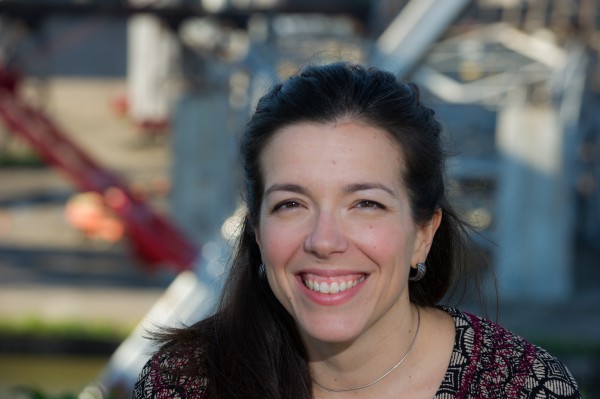 – What the readers will find in your book The Dead Key?
– The Dead Key tells the story of two women separated by twenty years and brought together by the same mystery. In 1998, Iris Latch is a young engineer just starting out in her career and adrift in her life. She is assigned to survey an old bank where she stumbles upon clues to a conspiracy that’s been hidden away in the abandoned building for twenty years. She soon discovers a young secretary named Beatrice Baker left behind a trail of breadcrumbs in 1978 that lead directly to the vault. As Iris follows in Beatrice’s footsteps to uncover the secrets locked in the safe deposit boxes, she realizes too late that the key to the mystery may cost her life.

– How did you decide to write the story?
– As an engineer working in Cleveland, Ohio, I performed a survey of an abandoned building that contained a vault full of unclaimed safe deposit boxes. The mystery behind the vault haunted me for years, until I finally had the courage to sit down and write the story I’d been dying to discover.
– What was the biggest challenge during the write up process?
– My degree is in engineering, and I have no formal training as a novelist or creative writer. The story poured out of me over the course of eight months, but the editing took nearly 4 years to complete. While I have always been an avid reader, there was so much I did not know about writing a novel. I wasn’t even sure what the genre the story might fit. All that I knew was that I had to write it.
– Tell us something more about your main character? Is it close to someone from your real life?
– Iris Latch was inspired by my own experiences as a young engineer and woman. I am not nearly as self-destructive and reckless, but I relate to her on a personal level.
– How much time did you need to finish the story and to publish it?
– I started writing the story in earnest in the spring of 2010. It only took eight months to complete the first draft, but the editing process took years. I nearly gave up on the project when I learned that the book was far too long to be published. I toyed with separating it into two books, but I didn’t want to divide the stories of my two heroines.
– Your book won Amazon Breakthrough Novel Award — Grand Prize and Mystery & Thriller Fiction Winner for 2014. Were you surprised by the nomination and how you entered into the competition?
– I am still in shock from the win. I entered the contest as a last ditch effort to keep my two heroines together. The word count limit was 125,000 and the draft I had at that time was about 153,000 words. In three weeks time, I slashed my book down to 119,000 words and submitted it to the ABNA with fingers crossed. I didn’t expect to get past the first round, and my ultimate goal was to make it to the quarter-finals where I would receive a Publishers Weekly review. I didn’t dare dream I would win.
– Who are you?
– By trade, I am licensed engineer specializing in the rehabilitation of historic structures and the investigation of building failures. I run a small consulting business out of my home on a part-time basis. I quit working full-time when my husband and I decided to start a family. When my second son was born, I left my job altogether. The plan was to put my career on hold while our kids were young. After a few weeks at home, I got restless and decided to start writing the novel I’d been dreaming about for almost ten years.
– What are your writing habits?
– I usually write Monday through Friday for two to three hours each morning. I don’t typically write on weekends, holidays, or when my kids are home from school.
– Are you satisfied by the sales of the book?
– The Dead Key is an Amazon Kindle best-seller at the moment, and I am thrilled.
– What are you doing to promote your book by the best possible way?
– I was fortunate enough to win the ABNA, and I am receiving amazing support from Amazon and my publisher. I am also booking speaking engagements, book fairs, and signings here in northeast Ohio. You can visit my website at http://www.dmpulley.com for a list of upcoming events and links to my Facebook and Twitter accounts.
– When we will see your next novel?
– It’s hard to say. I just finished my first draft and plan to finish editing this spring. Once it is submitted to my agent, it will likely be many months before it is released.
– Why you are using a pseudonym?
– Pulley is a family name near and dear to my heart, and I had never doubted that I would use it if I ever wrote a book. I am avoiding publishing my legal name in an effort to protect my family’s privacy. I have two small children, and I don’t want any of this to affect them.
– You are working as a rehabilitator of historic buildings. It’s a very interesting job. What is your theory of Egyptian pyramids’ build?
– I am by no means an expert on the ways of the Egyptians. I do know that the ancients had amazing building technologies, some of which were lost to antiquity. In addition to that, they had access to huge pools of cheap labor. The most compelling theory I’ve heard thus far involves a complex ramp system that allowed them to transport the large stones into place.
– If you may ask yourself one question in the interview what it will be? (Don’t forget to answer)
– So many people dream of writing a book, but can’t seem to finish. What inspired you to keep writing and editing all those years? I never would have had the guts to stick with the book through all the frustrations and pitfalls if it hadn’t been for my husband. He never stopped believing in me and my idea even though he absolutely no good reason to think it would ever amount to anything. He believed in the project even when I didn’t. I can only hope I will have the chance to repay him for his endless encouragement, generosity, and love. Every writer should be so lucky.

Take a look at her book
The Dead Key

← SIMON WOOD: AN ISSUE OR SITUATION INSPIRES ME TO WRITE A BOOK
HANNAH FIELDING: VENICE CAPTURED MY IMAGINATION →