Hot Sinatra by Axel Howerton was finalist for the 2014 Arthur Ellis Award for Best First Novel. The author is former journalist and master of short stories. He was also a former amateur boxer and semi-pro kickboxer way back in time. It’s a great chance that Axel will be our next guest in our Q&A section. I’ve made many interviews in my professional life. Some of them are good, some of them are boring and some of them are really interesting and may be rated with Five Stars. The one with Axel, despite the fact that was made just by asking questions via e-mail, is probably the coolest one in the blog! 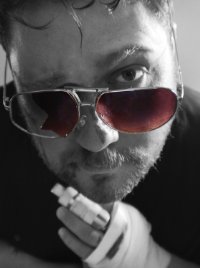 – What is your book Hot Sinatra about?
– Hot Sinatra is a throwback to the pulp detective stories of the 1930’s and 40’s, to my favorite authors – Hammett, Chandler and the like. It follows a middle-aged, recovering alcoholic, danger-prone ex-cop who has taken over his grandfather’s private investigation business. The grandfather was a prototypical Bogart-style detective, who was well-known and revered in Los Angeles, and our hero has a hard time living up to that legacy. The hero, Mossimo Cole, gets mixed up with a crazy old record producer who has lost a very rare Frank Sinatra record, which he believes was stolen. Soon Mossimo is caught between the Las Vegas mafia, the Yakuza, Mexican drug lords, and a 60 year-old mystery surrounding the record producer’s wife and child. He is helped (and hindered) along the way by his best friend, a foul-mouthed Irish rock star, two hired thugs, the record producer’s beautiful daughter, and a collection of strange characters from the streets of L.A. It has been very well received by critics and readers, as well as being a finalist for the 2013 Crime Writers of Canada award for Best First Novel.
END_OF_DOCUMENT_TOKEN_TO_BE_REPLACED