ALICE QUINN: I LOVE TO LAUGH

The French author Alice Quinn made her English language debut with Queen of the Trailer Park. The official release of the edition was on June 1. The novel was part of Kindle First Choice program and found its place among Top 10 bestselling titles for May. Just one day after the premiere we are very happy to introduce to Land of Books audience our next guest. Let’s say welcome to Alice Quinn. 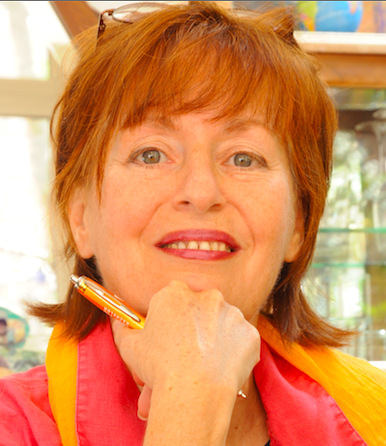 – Alice, what is your book Queen of the Trailer Park about?
– Queen of the Trailer Park is telling the story of a young woman, Rosie Maldonne. She is outspoken and sexy. She’s also unemployed, and with three children and a cat life is a little tough. The four of them—well, five, if you count the cat—live in the South of France, in a run-down trailer near a vacant lot. They are living thanks to her part-time waitressing job and a little help from the state.
Rosie things are finally turning around when she meets handsome police officer Jérôme—until she realizes that his appearance coincides with her friend Véro’s disappearance. Then something even stranger happens: Rosie finds a package with a crazy amount of money in the trash can of a fast-food joint. With so much going on, Rosie has some big questions: Where is Véro? Is Jérôme too good to be true? Who put all that cash in the trash? And what happens when they want it back? 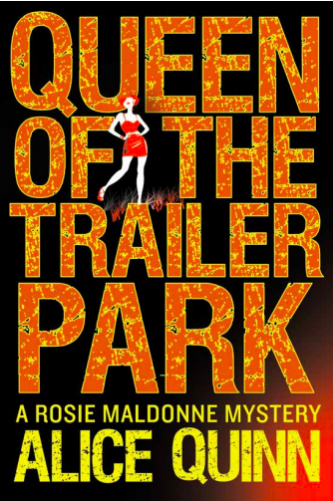 – How did you decide to write the story?
– Because of my personal situation which was not brilliant at the time. Inventing my character Rosie Maldonne became a necessity. At one point in my life when everything was going wrong, but when I say everything, that’s really all.
So I created this character as a lifeline. I had to find how writing is everything that I no longer had in my life. I needed a daily appointment with the joy of life with the lightness, with the courage. I needed a friend who has all the daring, never afraid of anything. That was a heroine, a real one.
And when Rosie Maldonne came to my mind, I thought: “And why not give her even more: all that I don’t have in me? Beauty, sex appeal, intelligence of the heart, unconscious courage?”
I think too much to be brave! And to close the main features of my heroine, I decided that Rosie would advance in life by instinct. After all it was time that I listen my intuition too.
Rosie has become a kind of twin ideal for me. When I ask myself now about my choices and I did not know what to say, I wonder: “And Rosie, what she would do or say in my situation? ”
And then I have my answer. She guides me.
– What was the biggest challenge during the write up process?
– The particular language of Rosie Maldonne requires special attention from me. Her humor too.
– How much time did you need to finish the story and to publish it?
– About a year, sometimes more.
– Tell us something about the sequel of Queen of the Trailer Park – Queen of the Hide Out?
– In the second volume, which is not out yet, Queen of the Hide House (as Rosie Maldonne is a series), Rosie Maldonne, the young woman, suspected of murder, will have to hide with all her smala to try to unmask the real killer.
In each new adventure, Rosie, who falls in love easily, will fall in love with a new crush, with more or less success in this attraction.
– Who are you (Would you describe yourself with few sentences)?
– I love to laugh. I love when my books are good for the reader.
For me it’s rather die than to annoy a reader!
I decided to laugh and make people laugh to stay healthy, when I found this quote from Voltaire: ‘I decided to be happy because it’s good for my health’ I copied his motto.
The humor came to me late. When I was young I was always in tragedy and melodrama. Now I love to laugh. Laugh seems to me the most precious good in the world. It is for me a sign of dignity, courage and elegance.The most mistreated by life People are those who have the most sense of humor. However humor is something difficult to share because we all have a sense of humor that we own.
– What are your writing habits?
– I write on a couch with a drink not too far and my cat on me.
– Are you satisfied by the sales of your books?
– My sales have exceeded my dreams.
– What are you doing to promote your book by the best possible way?
– I do not know very well how to do that but I try to keep my blog updated, and maintain my FB and my twitter.
– When we will see your next novel and would you unveil something more about it?
– My next novel will be released in French on Kindle France in October 2015.
The date for the release in English is not yet fixed.
– Would you share your experience working with translator for the publishing of English edition?
– I like working with my translator very early. I try to meet my translator, and to read out the entire novel in French voice to dissect every word games, all popular expressions, slang, diverted clichés, etc.
Then, the work becomes easier for the translator.
– Do you remember the moment you decide to write a full novel?
– I started my relationship with writing by screenplays. I went to the novel when I saw that I was not able to make films with my scenarios. So I turned my scenarios into novels.
– If you may ask yourself one question in the interview what it will be? (Don’t forget to answer)
– You are one of the few French authors to be translated into English? How do you live with this? Yes, Rosie Maldonne brought me luck overseas from France! It is fabulous enough to be read by readers of another culture, and it will be true in English-speaking countries, in different cultures as well as it is going out in England and in Australia, Canada or USA …
I note that on feedback in English on “amazon.com”, the reactions are pretty much the same as in France. A majority of comments are inspired by the exhilaration and freshness of Rosie, and some are irritated by the character. About the same amount and for the same reasons as in France.
I think that humor of Rosie Maldonne is actually quite universal, at least in the Western world. I thank to my character for her luck with which she is so generous. I hope this luck also spills over my readers who have a good time with her.

To end this interview, I want to tell you how happy I am to have the honor to be part of authors’ meeting in your blog. Thank you.