← JACQUES VANDROUX: MY WIFE IS HALF THE HEART OF OUR WRITING ADVENTURE
ANGELO MARCOS: MY NEXT NOVEL WILL BE FINISHED AROUND MID-2015 →

AHMAD ARDALAN: SADDAM HUSSEIN LOVED IRAQ IN HIS OWN WAY

Iraqi author Ahmad Ardalan published his last novel The Gardener of Baghdad in the summer. “This story is so sweet”, “The story caught my heart”, “Absolutely beautiful story” are some of the comments by the readers, who gave an average 4.8 rating in Amazon from 12 reviews. In the following interview our guest is speaking not only about his books, but about his country, which is still suffering by the war. 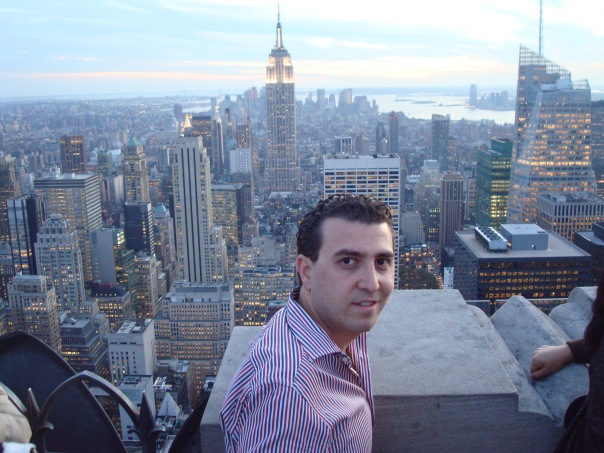 – Ahmad, what is your book The Gardener of Baghdad about?
– A historical romance set in the golden era of Baghdad. It reflects life in two periods of time, present day Baghdad, and the 40’s and 50’s of this great city. Adnan, a bookshop owner finds a fifty years old memoir, and discovers through the eyes of Ali, The Gardener of Baghdad, that one can restore the belief of hope, and love even in the darkest times.
“Two people, one city, different times; connected by a memoir. Can love exist in a city destined for decades of misery?”

– How did you decide to write the story?
– I was forced to leave Baghdad during the war due to security reasons known to all. After eleven years, I made my first visit back to Baghdad on business. The damage, and change in Baghdad was painful. My emotional response was to give back to my beloved hometown by writing a novel about hope and love even in the darkest of times.
– What was the biggest challenge during the write up process?
– The 40’s and 50’s were important times in Iraq, full of events. I had to do a lot of research about that period. I went through many resources, and met many people who had knowledge about that period.
– Tell us something more about your main character Adnan? Is he close to someone from your real life?
– I have two main characters Adnan, the bookshop owner who represents any struggling Iraqi family man, in search of safety away from the daily dangers of life in Baghdad. My second character Ali, a gardener in Baghdad five decades ago, is the model of passion, hope and love. A dreamer like many who believe in a better future for Iraq.
– How much time did you need to finish the story and to publish it?
– It took me five months from writing, editing and publishing. I published it July 31, 2014
– Give us some insight about your previous book The Clout of Gen?
– It is a mystery fiction with a Sci-Fi touch. I had always been in love with Time-travel, the idea of altering events in time.
The story talks about a fading journalist, that uncovers a conspiracy hidden for decades, a conspiracy that stretches from East to West, a source of knowledge, knowledge of events that happened way long before they actually did.
– Who are you?
– I am a dreamer, a 35 years old Iraqi dentist, that decided to pursue a career in business. A job that would take me around the world, meet people from all over, and learn about cultures.
– What are your writing habits?
– I don’t follow a pattern, whenever I have an idea, I try to find anything to write on, and as the ideas flow the story builds up. When I finally decide to sit down and write, I enjoy a cup of Turkish coffee, as well as a Hubbly Bubbly to smoke on the side.
– Are you satisfied by the sales of the book?
– If I had to rate my sales on a scale of 10, I would say 6/10
– What are you doing to promote your book by the best possible way?
– I have monthly ads, with different promoters, as well as staying in contact with people through my blog, or other social media.
– When we will see your next novel?
– The first part of my short story thriller series Matt Vol I will be out 23/1/2015. Part Two Matt Vol II (Chaos in Dubai) will be out 4/2/2015.
– I never been to Baghdad, but how much of all the beauty of the city, told by many tales, is still possible to be seen?
– Wars have taken its toll on this beautiful city. If you visit Baghdad now, you will see a city that has lost its heart. I can simply compare the city to a beautiful room in castle that has collected dust for decades. It needs special care and dedication to restore what was once there.
– A little touchy question, what are your memories from the war in Iraq?
– Wars always leave bitter notes. I recall painful memories, good people lost, an unjust war that caused a united nation to be divided.
– Your opinion on Saddam Hussein and his execution?
– Timing was awful. He was executed on the first day of Eid, a Muslim celebration. Saddam Hussein was not shy of faults, he had many, but he deserved a better trial. He was a man of the people, unlike most who control power in Iraq today. He truly loved Iraq in his own way.
– If you may ask yourself one question in the interview what it will be? (Don’t forget to answer)
– With all the daily misery and darkness, do you believe in the future of Iraq? Yes, I am sure of it. A nation that has a rich past, will always have a future. We are the oldest civilization in the world. We will rise again and live as one.

The Gardener of Baghdad
The Clout of Gen
Matt Vol I: (A Matt Godfrey short story series)

Posted on January 15, 2015, in Author, Books, Interview and tagged Ahmad Ardalan, author, interview, Iraq, The Clout of Gen, The Gardener of Baghdad. Bookmark the permalink. 2 Comments.

← JACQUES VANDROUX: MY WIFE IS HALF THE HEART OF OUR WRITING ADVENTURE
ANGELO MARCOS: MY NEXT NOVEL WILL BE FINISHED AROUND MID-2015 →