← MONTGOMERY MAHAFFEY: I TURN A FABLE INTO A NOVEL
J.M. PORUP: AMERICA TODAY IS LITTLE DIFFERENT FROM THE SOVIET UNION UNDER STALIN →

JAMIE MALTMAN: I’VE ALWAYS WANTED TO WRITE IN A SETTING LIKE ROME

Jamie Maltman’s Arts Reborn series have a chance to become a big hit. The author is very talented and the history fiction world he describes is very interesting. It’s a real pleasure to have in our Q&A Mr. Maltman! Enjoy.

– What is your book Brush With Darkness about?
– The Pazian Republic is similar to Rome in the time of Caesar, where their legions have conquered/integrated much of the known world. Magic has become the stuff of legend and myth.
So when dark magic reappears in the hands of one of a formerly subjugated barbarian people, it presents the greatest threat the Republic has ever faced. Throw into that setting Simon Baroba, a fresh young legionary who is better at drawing than fighting, who is faced with the reality of the dark magic and has to deliver that message to the Senate. To do that he’ll have to unlock his own buried creative Talent, navigating through new friendships and rivalries that teach him more about himself and the world, but could lead to doom for his nation, his friends, or himself. 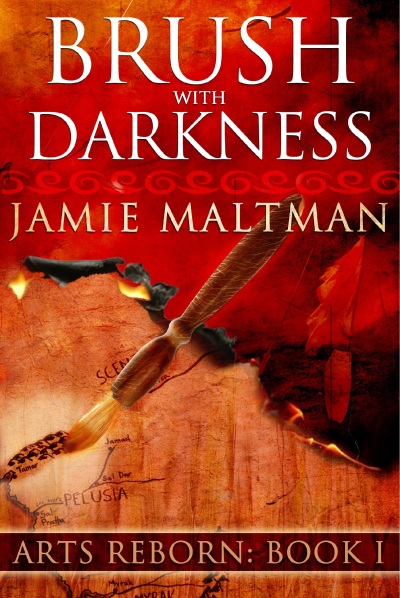 Check out more about Jamie at his web page

Posted on September 19, 2014, in Uncategorized and tagged Arts reborn, author, Blood of the Water, Brush With Darkness, interview, Jamie Maltman. Bookmark the permalink. Leave a comment.

← MONTGOMERY MAHAFFEY: I TURN A FABLE INTO A NOVEL
J.M. PORUP: AMERICA TODAY IS LITTLE DIFFERENT FROM THE SOVIET UNION UNDER STALIN →